Are LED lights bad for your eyes?

We always hear “everything in moderation,” but what about light? We have phones, laptops, TVs, and even LED light bulbs readily available 24/7, providing constant light. Of course, overexposure to anything can lead to negative effects. But how are LED lights bad for your eyes?

What is harmful about LED lighting?

Like the sun, LED lights produce blue light. Blue light ranges from shorter wavelength, 400nm to 500nm, on the visible light spectrum, close to invisible ultraviolet rays. Before the rise of technology, the sun primarily provided blue light, which wakes people up and boosts energy levels. But now modern life revolves around screens, which emit blue light, even after the sun has set.

This leads us to the major issue of overexposure to blue light. In a study conducted by the French National Agency for Food, Environmental and Occupational Health Safety (ANSES), recommends limiting blue light exposure due to the damage it can cause.

When it comes to sleep and our circadian rhythm, blue light raises energy levels and interrupts the production of melatonin, which helps us fall asleep. According to the Lighting Research Center, “the circadian system is highly sensitive to short-wavelength blue light.” Staring at your phone or watching Netflix in bed keeps you up longer, and lack of adequate sleep relates to many different health problems.

Why use LED lighting if it can hurt my eyes?

While we don’t want to observe blue light before bed, we can utilize LEDs with more blue light during the day to our advantage. Using 4000K+ color temperatures can increase productivity in the office or in schools as blue light “directly and immediately improves alertness and performance,” according to Brigham Health. Try using some daylight white or cool white lights in offices and task-oriented environments.

And if you didn’t already know, LED lights save energy, money, and time requiring less power and maintenance than incandescent or fluorescent equivalents.

How do I mitigate negative effects from blue light?

Like we mentioned at the beginning, everything in moderation. Don’t stare into a screen for extended periods of time if you can help it. Several ways to protect your eyes from blue light damage include:

Keep your eyes happy and healthy by limiting your exposure to blue light! Never stop saving your vision with HomElectrical’s guide on LED lights and their effects on eyes. 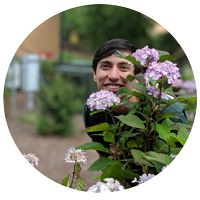 Mark graduated with a B.S in Communications from Kennesaw State University in 2020. Enlisted in the United States Marine Corps from 2012 to 2016, Mark operated as a Photojournalist and Correspondent at the Marine Corps Base Camp Lejeune Public Affairs Office. Learning from his time in the military, Mark prides himself on having an adaptable and mission-based mindset with a willingness to work cooperatively to craft quality content.